THE DECADE OF THE HEART: THERAPIES AT THE HORIZON FOR GENETIC CARDIOMYOPATHIES

La precision medicine plans to develop drugs targeting the subgroup profile of patients (or even the individual) rather than all patients with cardiomyopathy.

It was the great novelty in biomedical research of the decade 2010-2020, which saw hundreds of new molecules with extremely targeted mechanisms of action appear in clinical practice. However, almost all of them have been developed for tumor pathologies, sometimes with amazing results, but not for cardiovascular diseases, in which non-specific drugs (beta-blockers, diuretics, etc.), of wide diffusion and low cost, are still successfully used. 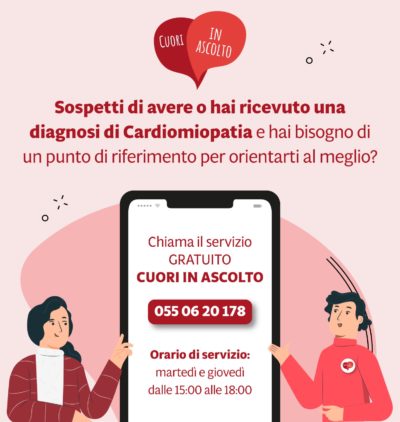 If you need help call us or send a request

Therefore, patients with genetic diseases, including cardiomyopathies and their various rare syndromic and metabolic forms, did not benefit from it. However, the most recent studies allow us to hope that the 2020-2030 can become a real decade of the heart. Molecular and gene therapies are being tested or even already in use for various genetic pathologies that have so far lacked specific treatments, such as, for example, theCardiac amyloidosis, Duchenne muscular dystrophy, la Fabry disease, some forms of dilative cardiomyopathy and Danon's disease.

But one of the most promising sectors is the one that concerns the Hypertrophic cardiomyopathy (MIC), the most common genetic heart disease in the general population, with an estimated prevalence of over 100 people in Italy. The defect underlying this pathology is a form of natural "doping", for which the genetically modified contractile proteins are activated in an excessive way, causing an abnormal consumption of energy and a premature aging of the heart muscle in some of its parts. This anomaly would be at the basis of many clinical manifestations, such as arrhythmias, dynamic obstruction, disease progression with the development of fibrosis (documented by cardiac magnetic resonance with contrast medium) and heart failure.

Researchers from two American companies (Myokardia and Cytokinetics) have developed molecules capable of reduce the contractility of the heart, moderating it and bringing it back to normal levels. In practice, the action of these drugs is to transform a turbo-injection engine into a diesel, with the aim of making the engine last longer, preventing breakdowns and reducing consumption. The molecule developed by Myokardia, called Mavacamten, in a preliminary study (called “Phase 2”) in patients with Hypertrophic Obstructive Cardiomyopathy, has been shown to reduce or eliminate left ventricular outflow obstruction, a negative consequence of cardiac supercontractility. A marked reduction in symptoms, especially exercise symptoms, has also been reported in these patients. A subsequent "Phase 3" study called Explorer-HCM (the one that is needed to lead to the registration of the drug and its subsequent marketing) gave very positive results. Consequently the drug will be employed in patients with Hypertrophic Obstructive Cardiomyopathy, with the aim - among other things - of reducing the need for "myectomy"you hate "alcoholization”, The two most frequent modalities with which the obstruction to the outflow of the left ventricle is currently eliminated. The hope is that the drug will work equally well on patients who do not have an obstruction to the outflow; Recent data from a pilot study called Maverick-HCM with the molecule developed by another company (Cytokinetics), which has only one acronym (CK-274) is encouraging. Phase 2 study (Redwood-HCM) is now underway.

Parallel to the discovery of new drugs, an approach called "therapeutic repositioning"Of drugs already known, a frontier if we want low-cost but just as important as pharmacological research. The development of molecules has very high costs (millions of euros from synthesis in the laboratory to clinical studies and marketing), which inevitably affect the price charged to the health system. The research of the therapeutic repositioning instead aim to find new uses for existing drugs in the treatment of diseases other than those for which they were developed (a typical example is aspirin in the prevention of myocardial infarction). According to this approach, for example an antiepileptic can be effective in treating infections, or an antibiotic can be used to treat metabolic diseases. Many efforts are directed in this direction, to ensure sustainable therapies for all. An example of therapeutic repositioning that concerns the Hypertrophic cardiomyopathy and the Ranolazine, a slow calcium channel blocker in heart muscle cells. This drug interferes with the levels of calcium, an ion essential for cell contraction, and therefore on the contractility it regulates. There Ranolazine is able to reduce cellular oxygen consumption (if we want to make a comparison with a car engine, how to reduce fuel consumption). For this reason, it has been used successfully for over 10 years in patients with ischemic heart disease, coronary artery disease. Based on experiments designed and carried out at the University of Florence, the drug has proved effective in reducing the symptoms of patients with Hypertrophic cardiomyopathy, not only for an effect on myocardial ischemia and energy consumption, but also for beneficial effects on myocardial relaxation, severely altered in this pathology. Furthermore, the Ranolazine showed in some patients a clear effect of prevention of ventricular arrhythmias, which are those associated with the risk of cardiac arrest and sudden death. Based on these trials, patients with Hypertrophic cardiomyopathy they were able to benefit from a drug aimed at key mechanisms of their pathology following a rapid and low-cost process.

The potentially more decisive future developments, but also more distant in time, are those related to gene therapy, through which it is hoped to be able to solve the genetic problem at the root and therefore to cure the Cardiomyopathies. This approach is already at an advanced stage of study in some pathologies such as Duchenne muscular dystrophy and Fabry disease, which allow a relatively simpler approach from a technical point of view. In the case of the Hypertrophic cardiomyopathy a radical solution of this type still appears far away, because it is linked to modifications of structural proteins of the heart, whose mature cells do not undergo reproduction. Gene therapy should be able to bring the healthy gene into each cell to normalize it by introducing the normal gene: unfortunately we still don't have vectors that can do that.

Given the magnitude of the international effort in this fascinating area of ​​biomedicine, however, it is likely that by the end of the decade that has just begun the prospects for patients with cardiomyopathies will go beyond our current expectations.