For many years it has been possible to treat arrhythmias with the procedure Ablation, (essentially elimination), by means of a lead introduced through a vein to the heart cavities. In the Electrophysiology room, a mapping of the atrial or ventricular cavities is carried out, to verify the location of the anomaly responsible for the arrhythmia, which can be clearly seen on the color screen of the computer. Once detected, a pulse is applied that generates heat (Radiofrequency ablation) or cold (Cryoablation) in the same location, in order to block its functioning and eliminate the arrhythmia. The procedure is usually well tolerated and can now be performed even without X-ray monitoring. The risk of complications is usually low.

La Atrial fibrillation (DOES) it is the most frequent arrhythmia in patients with cardiomyopathy, favored by the possible dilation of the left (and sometimes also right) atrial cavity and by the age of the patient. There FA it is in fact more frequent in subjects over 50 years of age even in the general population. Initially it looks fit paroxysmal (i.e. begins and then passes spontaneously), but drug therapy may be required to restore rhythm antiarrhythmics, usually intravenously, or one Electrical cardioversion (under short-term anesthesia).

Over 20 years ago it was discovered that atrial fibrillation could originate from an area of ​​the left atrium where the pulmonary veins (the veins that collect the blood passed through the lungs to oxygenate) open. It is then at the outlet of the pulmonary veins that the procedure is performed ablation. Sometimes it has to be repeated after a few months if the FA  relapse.

The results are usually good, but depend on the age of the patient, the completeness of the surgery and the size of the atria, especially the left one. If it is too dilated, the probability of success decreases. In any case, some patients still require antiarrhythmic and anticoagulant drugs even after ablation.

Over 40 years ago, it was discovered that atrial flutter depended on an abnormality not in the left but in the right atrium, usually around the outlet of the inferior vena cava (which collects blood from the lower body). The ablation procedure in these cases is simpler and has a higher probability of success.

This arrhythmia, which can occur in all ages (even in the fetal age !!) can originate from a small portion of tissue that is "short-circuited" and is usually found at the junction between the atria and the ventricles, but also in other locations that must be carefully identified. In the adult the TPSV extension has a heart rate of around 150 beats per minute, rarely faster. The result of the ablation is excellent in most cases.

In some patients the extrasystoles (premature beats, i.e. anticipated) are very frequent, and are not only annoying, alarming the patient, who warns them when he is at rest or during the night, but they can also be a problem. If they all look the same on the ECG (and dynamic ECG for 24 hours) they say "monomorphic". In these cases, when they exceed 5-10% of the total beats in 24 hours, the site of origin can be identified and therefore can be canceled with ablation, with a good chance of success.

This arrhythmia is important because if its speed is high, usually around 200 beats per minute, it causes loss of consciousness after a few seconds (syncope) and can degenerate into Ventricular fibrillation (VF), and consequently in cardiocirculatory arrest. It is one of the mechanisms by which patients with cardiomyopathy can unfortunately die suddenly, if not resuscitated in time. If there is a Defibrillator (ICD), can be recognized and cardioverted by theICD with an electric shock. In the hospital or in an emergency ambulance, it can also be interrupted with the administration of intravenous antiarrhythmic drugs and / or with External electrical cardioversion (AED)

In some cases the it can also have a slower rate (130-150 beats per minute) and be well tolerated for a few hours. It can stop with both intravenous antiarrhythmic drugs and with electrical cardioversion. In these cases theICD he cannot intervene because his heart rate is too low to be recognized.

The ablation of the it is a complex procedure, which in patients with cardiomyopathy it is recommended to perform in centers of excellence with great experience and advanced technology. 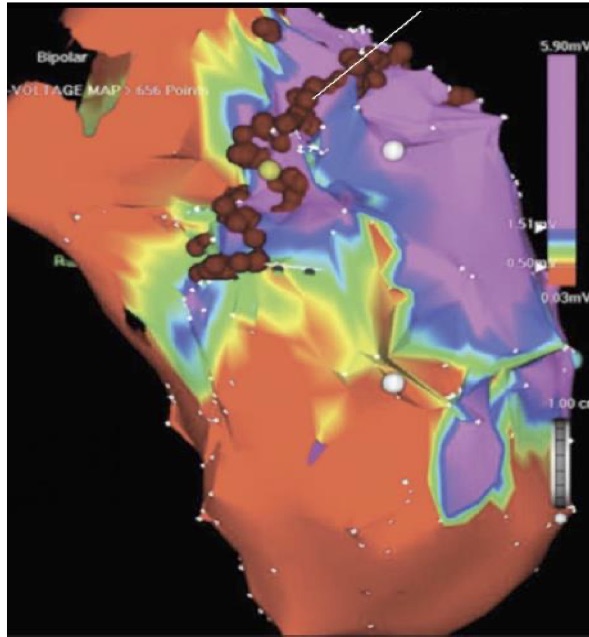