Restrictive cardiomyopathy: the size of a right or left ventricle chamber is reduced 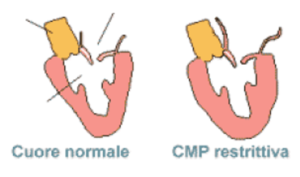 In Restrictive Cardiomyopathy (RCM), the rarest form of cardiomyopathies, the size of a right and / or left ventricle chamber(s) is usually reduced, while one or both atria are dilated. The walls are stiffer, less elastic, and their thickness is often increased, while ventricular filling is reduced.

They may be familial and caused by sarcomere gene mutations with massive hypertrophy (e.g. from double mutation of the genes that encode Myosin or Myosin-binding protein C) and / or severe diastolic dysfunction (e.g. in the genes encoding Troponin I) or in other genetic diseases such as Fabry disease, ATTR Cardiac amyloidosis , massive Hypertrophic cardiomyopathy (HCM) by accumulation of glycogen (Danon's disease).

Other non-genetic causes are well-known, for example, Hemochromatosis in Thalassemia major (typical in some coastal areas of the Mediterranean), Senile ATTR cardiac amyloidosis, cardiomyopathy secondary to Radiotherapy, Endomyocardial fibrosis in some African populations.

It can also be a consequence of the evolution of the HCM with progressive reduction of the thickness of the hypertrophic wall and increase in fibrosis.

It is often associated with arrhythmias, particularly Atrial fibrillation, and embolism if effective anticoagulation is not carried out, and presents a clear reduction in effort capacity, manifested by fatigue ("asthenia") and shortness of breath with mild exertion (Class III and IV), heart failure and even sudden death.

RCM usually presents a progression of symptoms and clinical picture and the indication for a heart transplant is frequent.