Fabry disease is a rare metabolic disease, due to the absence or deficiency of the enzyme α-galactosidase A in leukocytes. This enzyme is necessary to allow elimination of "waste" products from our cells, which tend to accumulate in cell structures called "lysosomes”, whose function is precisely to eliminate cell waste.

If the enzyme is absent, Fabry disease manifests itself in males in infancy and can cause kidney, brain or heart damage, already at a young age. If the enzyme is only markedly reduced, clinical manifestations appear later, usually to a much lesser extent and even later in females. After the age of XNUMX in males, but especially in adulthood and even advanced age, particularly in females, patients may develop hypertrophic cardiomyopathy (sarcomeric HCM), with progressive hypertrophy, even of a severe degree, isolated or associated with varying degrees of renal or other organ failure.

It is documented that about 1-5% of patients over 40 years of age have HCM due to Fabry disease. 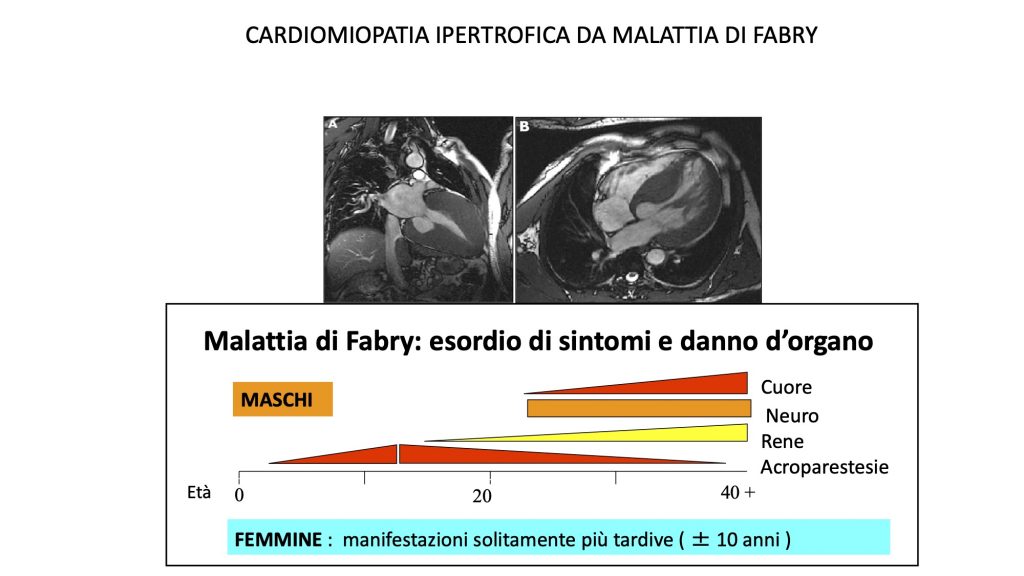 Diagnosis: is carried out by measuring the level of α-galactosidase A activity in liquid blood, with subsequent confirmation, if the activity is reduced or absent, by genetic analysis of the mutations carried by the specific gene (GLA). In males, the diagnosis of Fabry disease is excluded if enzymatic activity values ​​are normal or only slightly reduced. However, affected females may have normal enzymatic activity values, and it is preferable to carry out genetic analysis immediately, the result of which must be confirmed by experienced geneticists as the cause of Fabry disease .

In fact, the mere identification of a genetic mutation is not sufficient to make a diagnosis of Fabry disease.

Leukocyte α-galactosidase A enzymatic activity and genetic analysis are carried out, by appointment, in a few specialized laboratories in Italy (e.g. Meyer Hospital in Florence).

However, it is also possible to use a specific card on which a drop of blood is dried, called DBS (dried blood spot), which must be sent to the laboratories which carry out analyses in Italy or Europe and can be stored for up to 3 months.

Therapy: for about XNUMX years it has been possible to intravenously administer the absent enzyme, especially effective in not advanced stages of the disease. For some years now, oral therapy has also been available, to be used when enzymatic activity is only reduced. Forms of gene therapy are also being studied.

In Italy there are numerous referral centers specialized in the diagnosis and therapy of Fabry disease.