Left ventricular non-compaction: one or more walls of the left ventricle have a spongy appearance, associated with other walls with increased thickness or dilation of the chamber and reduced contractile force (ejection fraction) 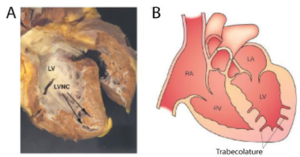 Left ventricular non-compaction (LVNC) is a rare form of cardiomyopathy characterized by large portions of the LV wall with a more trabeculated superficial part, with deep recesses between the trabeculae, i.e. "not compact", and a "compact” deeper layer, of less-than-normal thickness (which is XNUMX mm in adults). These areas have a spongy appearance and are well recognizable with Echocardiography and MRI.

The areas of "non-compaction” are usually at the tip and in the lateral wall of the LV, but in some patients they can also be extensive and associated with LV dilatation with reduced force of contraction, with a clinical picture of Dilated cardiomyopathy (DCM), or in other patients with hypertrophic areas with Hypertrophic cardiomyopathy (HCM). It is also possible to observe them in the LV of patients with different types of congenital heart disease.

The areas of non-compaction are believed to derive from an "incomplete maturation” of the heart walls, in the final stage of heart development.

It often derives from genetic mutations, more likely to be identified, as in other cardiomyopathies, if other cases are present in family members or if associated with HCM o DCM.

Small "non-compaction areas" can also be identified in patients without symptoms and in trained athletes. In these cases, it is necessary to very accurately distinguish whether cardiomyopathy is also present. In fact, in some cases arrhythmias may occur, both atrial and ventricular, even life-threatening up to cardiac arrest. If associated with dilation or reduced contractile force of the LV, it can lead to heart failure or embolic phenomena.